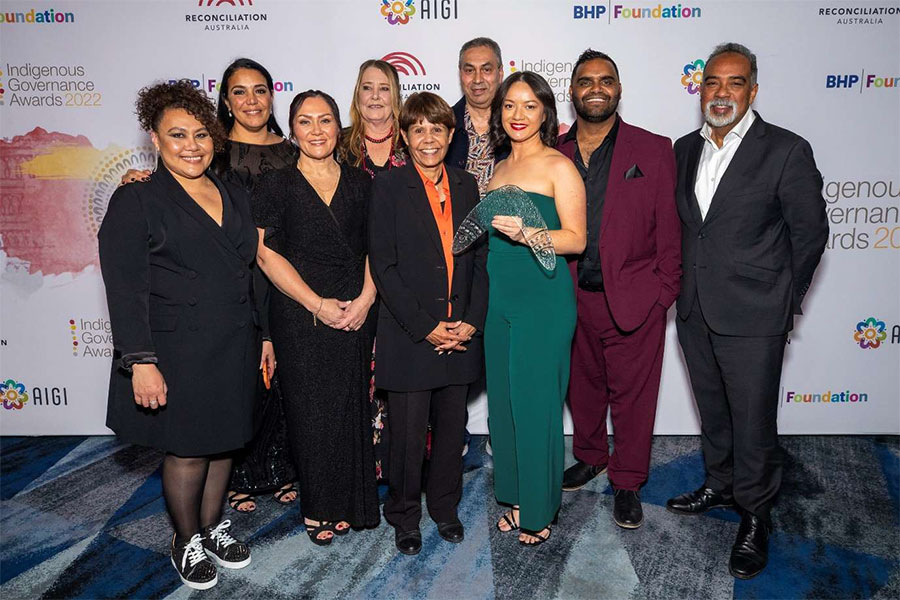 The South Australian West Coast ACCHO Network has been highly commended for outstanding examples of Aboriginal-led governance on a national level. On Wednesday the 8th of June 2022 at the ICC Sydney, the Indigenous Governance Awards ceremony, hosted by Reconciliation Australia and the BHP Foundation, acknowledged and
celebrated outstanding examples of governance in Indigenous led non-incorporated initiatives, projects, or within small to large businesses.

SAWCAN were one of nine Aboriginal and Torres Strait Islander-led organisations / initiatives from
around the nation who were shortlisted as finalists in the 2022 Indigenous Governance Awards.
Whilst we didn’t win, SAWCAN were one of two initiatives who were given high commendations
from the judging panel. Romlie Mokak, Indigenous Governance Awards judging panel member and
Productivity Commissioner said “the fact that you have been able to, in such a short amount of time,
change the way that governments themselves saw their program objectives and you were able to
step into that space and not only speak to it but re-negotiate what that looked like for your mob, I
think speaks volumes about the strength of your collaboration and the value that others see in it as
well, including government.”

Left to right: Karen Mundine, CEO Reconciliation Australia; Janine Mohamed, CEO Lowitja Institute; Donna Murray, CEO Indigenous Allied
Health Australia; Cindy Zbierski, CEO Nunyara Aboriginal Health Service; Zell Dodd, CEO Yadu Health Aboriginal Corporation; Warren
Clements, Public Health Manager Port Lincoln Aboriginal Health Service, Polly Paerata SAWCAN Secretariat, Leeroy Bilney COO Tullawon
Health Service and Romlie Mokak Commissioner with the Productivity Commission
SAWCAN is an act of self-determination and has worked tirelessly over the past 18 months to create
long-lasting and systemic change for the Aboriginal communities across the Eyre and Far West Coast.
SAWCAN Secretariat Polly Paerata explains, “Our strength is in our collective voice. We work
together as a region to ensure that health and social programs coming into our region are not only
based on what our community’s need, but they are appropriately funded and centred around
Aboriginal ways of being, doing and knowing.”

The inaugural SAWCAN Chair and CEO of Nunyara Aboriginal Health Service, Cindy Zbierski said, “The
Reconciliation Australia Indigenous Governance Awards showcased the best of the best in front of
peers and mainstream organisations. It demonstrates and evidences the outstanding work
Aboriginal organisations and community-led initiatives apply to achieve exemplary Governance from
an expected standardised compliance perspective, and importantly, the focus on cultural
considerations, inclusivity, and knowledge.”

Reflecting on the rigorous awards process, Director of SAWCAN and CEO of Yadu Health, Zell Dodd
said, “It was truly an experience I will never forget; I have already encouraged others to put forward
their governance model and be proud to showcase this. Everyone is a winner for being there.”
SAWCAN would like to extend their congratulations to all category winners and fellow finalists.
Click here to hear more about our story.

For queries about this media release, please contact Polly Paerata on polly.paerata@sawcan.org.au